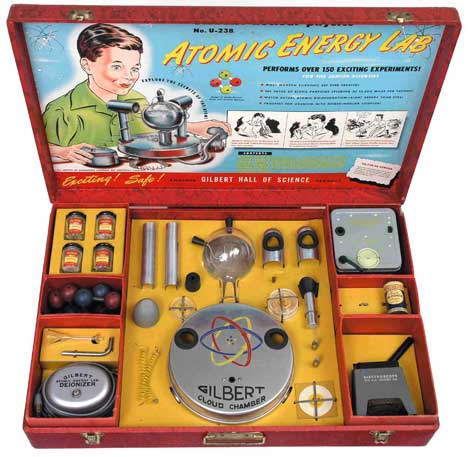 Science kits these days don’t contain many items that you couldn’t already find around the house: salt, balloons, magnets and a few odds and ends. But kids who were lucky enough to have wealthy parents in the early 1950s had the unprecedented chance to play with uranium ore in this very cool science kit. The Gilbert U-238 Atomic Energy Lab was only sold from 1951 to 1952, and at the time its $50 price tag was too steep for many families. 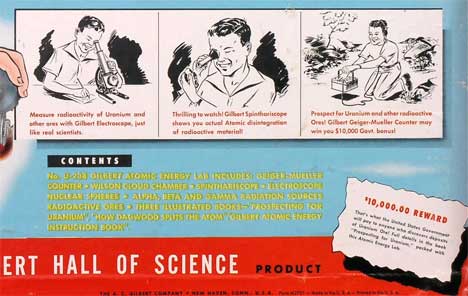 The kit came with four different types of uranium ore, a geiger counter, a miniature cloud chamber, an electroscope, a spinthariscope and an educational comic book called “Learn How Dagwood Splits the Atom!” Kids could perform their own experiments at home to discover the secrets of radioactive materials and learn how they made “clean, safe” atomic energy. The kit even included a government manual called “Prospecting for Uranium,” which claimed to be able to help kids discover new sources of uranium and be rewarded with $10,000 from the US government. 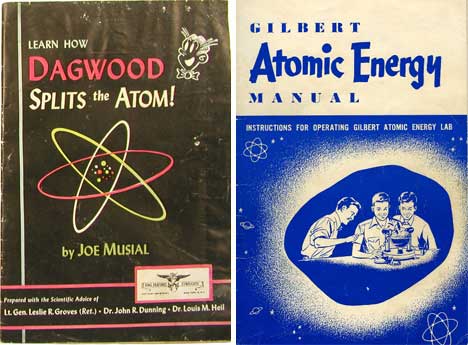 Because the radioactive sources only have a finite life, the instruction manual came with a handy re-order form on the back cover. Unfortunately, the product wasn’t on the market long enough for those ores to degrade, much less be re-ordered. There’s no way parents today would let their kids play with radioactive materials, but this science kit has become a much-sought-after collector’s item. Complete sets can sell for more than 100 times the kit’s initial cost.