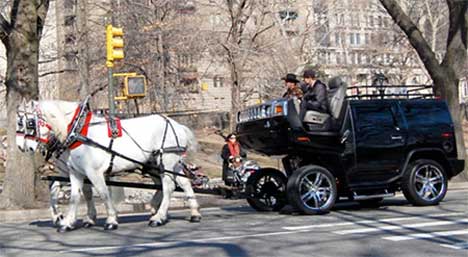 Hummers are known as some of the most inefficient vehicles ever. Getting nine miles to the gallon, they are not only a drain on oil supplies; they are a drain on our wallets in this age of extremely expensive gasoline. Although GM recently announced the end of the Hummer line, there are plenty of these beasts still rolling around out there. Artist Jeremy Dean took one of those beasts and put it into an entirely new context by turning it into a horse-drawn carriage.

The project is called “Back to the Futurama,” combining references to the “Back to the Future” movies and GM’s 1939 World’s Fair exhibit entitled “Futurama.” The exhibit showed a future world populated by cars and rich with automated highways. While many of GM’s predictions did come true – namely, the vast suburbs and huge network of streets – they couldn’t look ahead far enough to see the conclusion of those predictions: a world with too many cars, too little oil, and the need to make some big changes.

Dean’s project explores what might happen to all of those cars once the oil runs out for good. Maybe we’ll all end up driving fancy Hoover carts: car bodies pulled by animals because we can’t afford to fill them up with gas. The artist’s project is a satirical one, taking a tongue-in-cheek approach to drawing attention to our over-consumption and wastefulness, but it’s a powerful image. 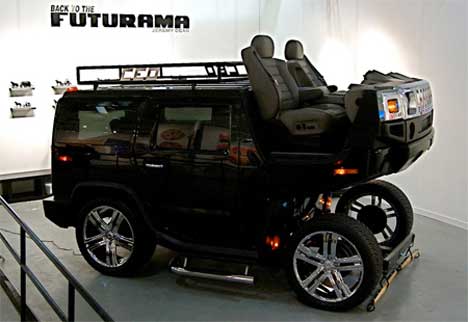 The project started when Mr. Dean bought a Hummer H2 for $15,000, then took it to a garage for some heavy modifications. He removed the engine, then turned the hood upside down to form a seat for the coachman. Other than the rearranged seating, the interior is largely untouched;  the DVD player, GPS and colored lights are still there. The chrome rims remain on the wheels. And the artist is well aware of the irony of embracing this icon of excess in order to shun excess: he calls it a time machine from a future world in which we’ve been destroyed by over-consumption. Regardless of how you feel about the project as a sociopolitical statement, it’s a masterful work of car mod art that stands on its own merits.

See more in Art Vehicles or under Transportation. May, 2010.