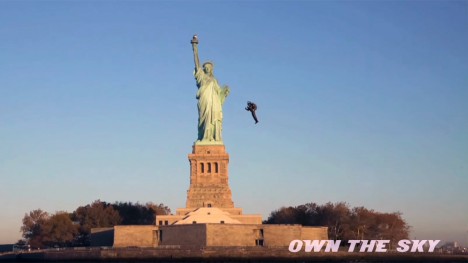 A childhood dream from The Rocketeer to Tomorrowland, the jet pack is now not only a reality but it just circled the most famous statue in the United States on an island in New York City.

JetPack Aviation chief David Mayman took his invention to the skies in a very successful publicity stunt aimed to help sell an upcoming commercially-available jetpack. While there are many other jetpacking attempts out there, this one is controlled, stable and sustainable for flight, as demonstrated in the video. They have done other tests and demos, mainly safely over bodies of water, but this one really shows what this thing is capable of.

“We believe a JetPack should be just that – a jet turbine powered backpack that is capable of vertical takeoff and landing (VTOL), is extremely light and small and can easily be carried around by the pilot. It should be powerful enough to lift the pilot quickly to thousands of feet above the ground but small enough to fit into the trunk of a car. Meet the JB-9 JetPack. The design of the airframe was helped by our earlier experience with rocketbelts but there were many changes needed related to the size, weight and shape of the engines as well as control systems and engine management systems. A jetpack on the other hand requires systems to start and cool engines, to manage fuel flow and to capture operating information for display to the pilot.”

See more in Mods & Custom or under Transportation. November, 2015.