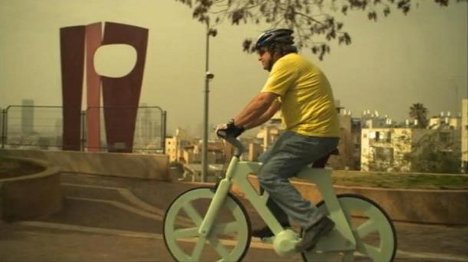 Bikes have been cobbled together from a ton of unconventional materials, but until now cardboard hasn’t seemed like a viable one. Designer Giora Kariv set his mind on making a cardboard bicycle, and although engineers told him it would never happen, he tinkered and folded and made his odd vision a reality.

The finished cardboard bike can hold a rider up to 308 pounds thanks to its super-strong origami-like folds and a protective coating. All told, the bike only cost around $9 to make. Kariv plans to sell them for up to $60 each, which is a pretty big markup but still won’t cause a major financial meltdown if it ever gets stolen.

See more in Bikes & Cycles or under Transportation. August, 2012.