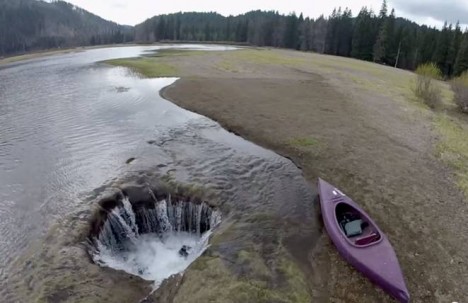 Each year, an entire lake in Oregon fills up with water, and then empties through a giant hole in its bottom, turning into a temporary meadow and sending its contents into the ground toward an unidentified set of mystery destinations. There is speculation about the moisture seeping into aquifers, but no study has yet managed to successfully track where the flow goes.

Per TreeHugger, “The volcanic landscape of the area gives way to a number of quirky geologic traits – the one responsible for swallowing the lake is a lava tube. The tunnel-like structure is formed when flowing lava hardens near the surface but continues to flow downwards, and the inner lava escapes before hardening. The result, a tube that opens to the surface and leads to the mysterious depths below.” 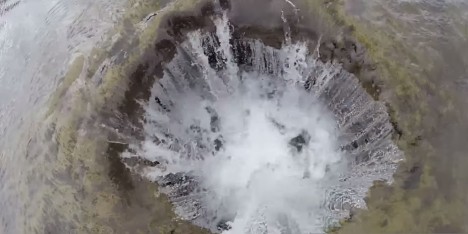 While the cycle is predictable and the forces behind it known, the sight is nonetheless dramatic and the ultimate fate of the lake’s waters still stumps scientists. A number of people have also attempted to ‘plug’ the whole with cars and other matter, but even if this were to work it would unbalance the natural process in place, not solving any real problems. For those fascinated by lost lakes, it is well worth reading the story of Lake Peigneur, a body of water that emptied entirely when miners accidentally pierced it from below: “The resultant whirlpool sucked in the drilling platform, eleven barges, many trees and 65 acres (260,000 m2) of the surrounding terrain. So much water drained into those caverns that the flow of the Delcambre Canal that usually empties the lake into Vermilion Bay was reversed, making the canal a temporary inlet.”