10,000+ Subscribers
Who Cuted the Cheeses? Photo Booth Cutes up Your Mug 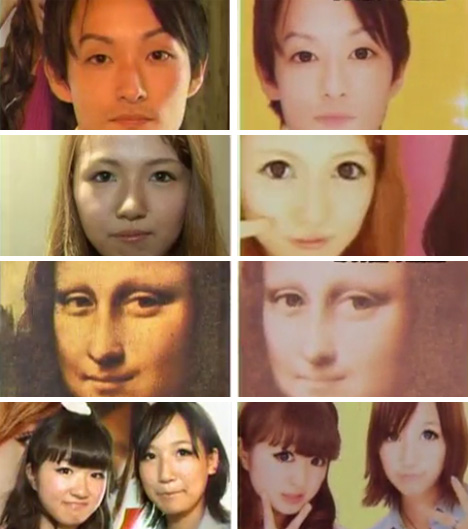 Remember posing in photo booths with your friends as a teenager? Everyone made goofy faces and funny gestures, and you got to keep a strip of pictures to take home to prove how much fun you had that day. If you were a teenager in Japan you’d get all of that plus some freaky retouching. Purikura (an abbreviation of “print club”) booths take pictures of you, smooth them out and remove your flaws, then print out photos that look vaguely like you…but a cuter you.

In the video above, a television show tests out the booths’ newest feature: eye widening. Admittedly, the pictures that come out of the booth are pretty cute (especially the Mona Lisa – who knew she was such a fox?) but who wants pictures that look nothing like them? Apparently lots and lots of Japanese people, because purikura have been popular there for years. They’re so good at what they do that one even erased the unsightly red dots two girls drew on their faces before posing for portraits. Online dating site members, we hope you’re paying attention: this is the perfect way to get a flattering (but still completely misleading) current pic for your profile.