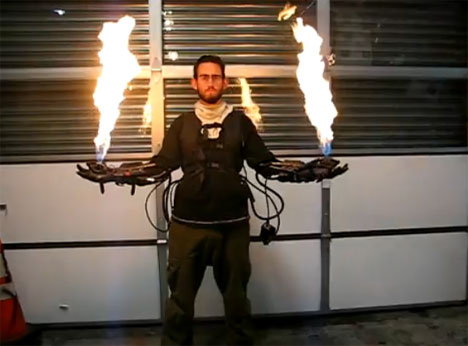 In quite possibly the most dangerous bad idea ever brought to life, some mad geniuses decided to build gloves that shoot flames. Why? For personal protection? For melting snow off of your sidewalk? Who knows? All that matters is that they’re awesome and we can’t stop watching. It looks like they work with a series of hoses that blast fuel out through the palms of the gloves.

According to the creators of this terrifyingly cool project, this isn’t even the finished version. They have plans to streamline the system, reducing the size of the hoses, cables and gloves and hiding them in the costume of the “performer” wielding the fabulous flaming gloves.

See more in Do It Yourself or under Technology. February, 2011.