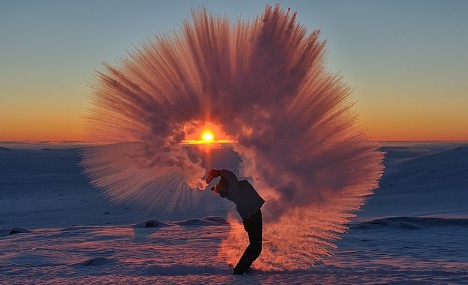 Perfect timing and extreme temperatures mix to make this amazing series of photographs in which you can watch hot liquid instantly turn into dramatic ice plumes in midair.

Michael Davies, a photographer from Canada, took pictures of his friend throwing out a thermos full of tea in Pangnirtung, a remote spot in Canada’s High Arctic (only a dozen miles south of the Arctic Circle). With just a few hours of daylight during the winter, and temperatures down to and below negative 40 degrees (fun fact: that’s the same in Celsius or Fahrenheit!), there are few better places for such an insanely frigid photo shoot. 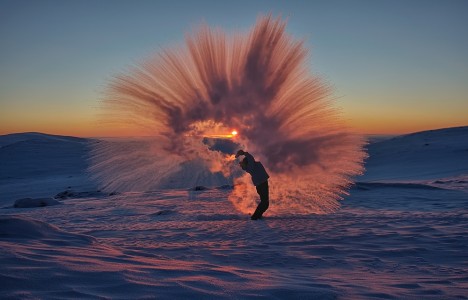 From the photographer: “Around 1pm I jumped on my skidoo along with my friend Markus and we drove 45 minutes to the top of a nearby mountain where the light (which is almost always pink near the solstice) would hit the hills. Prepared with multiple thermoses filled with tea, we began tossing the water and shooting. Nothing of this shot was to chance, I followed the temperature, watched for calm wind, and planned the shot and set it up. Even the sun in the middle of the spray was something I was hoping for, even though it’s impossible to control.”

See more in Weird Science or under Science. February, 2016.