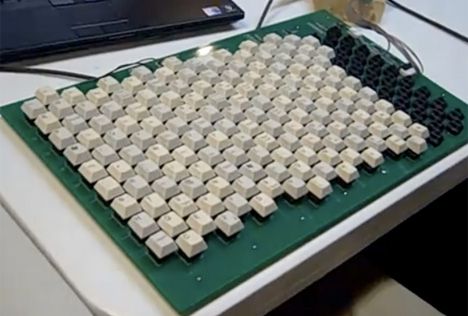 The typical music keyboard is derived from the classical piano setup. But the piano keyboard is arranged the way it is because the keys have to activate hammers that strike strings; electronic keyboards don’t have the same restriction so can in theory take just about any shape. This project from two members of Louisville Soundbuilders is an isomorphic keyboard featuring a layout that is dramatically different than that familiar piano layout. The 192 keys are velocity-sensitive, meaning that they play louder the harder you press them.

The guys behind the project want to eventually replace the computer keys on top with custom hexagonal keys featuring color codes so that it’s easier to tell exactly what you’re playing. Even with the current layout, though, the keyboard is absolutely amazing. The creators give a rundown of the keyboard’s construction, an explanation of its layout and a short sample of its abilities in the above video.

See more in Do It Yourself or under Technology. August, 2011.