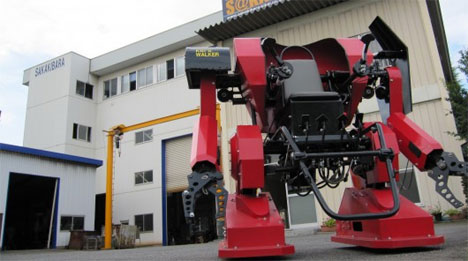 If you thought tantrum-throwing kids were dangerous on their own, just wait until they all start walking around in these scary-looking exoskeletons. The Kid’s Walker was made by Sakakibara-Kikai, a Japanese robotics manufacturer that previously manufactured a larger adult version. When kids kept asking for rides on the big machine, the company decided to make a safer, smaller version just for them.

The Kid’s Walker stands just over 5 feet tall and, despite looking terribly scary, was actually designed with the pilot’s safety in mind. Its movements are slow enough that it remains stable and won’t tip over, and the controls are simple enough for a kid to operate. Besides being the best powered toy since Power Wheels, the Kid’s Walker could some day be used to help kids with mobility issues get around without wheelchairs. Don’t expect to find the big mecha in stores anytime soon, but the company thinks that if they were to sell it on the retail market it would go for around $21,000.

See more in Robotics or under Technology. October, 2010.