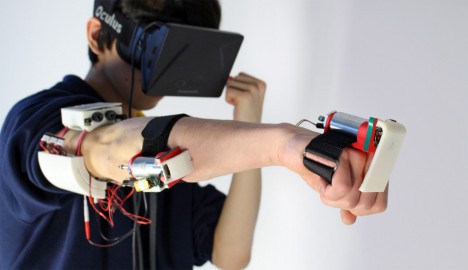 Virtual reality’s promise of an immersive environment is impressive, but generally incomplete without something like this newly-developed system to let users actually feel the effects of interacting in digitally-created cyberspaces through actual muscle stimulation, a big step beyond low-tech vibrations.

Simulating physical impact, as demonstrated above, combines tactile and muscle stimulation via a device called Impacto. The accessory is worn on arms, legs, hands or feet and tied into the virtual reality experience with specialized software, allowing people to touch and feel objects. Well on its way to being fully wireless (for now it is at least not cord-connected to an external device), it lets users move around in real (and virtual) space without feeling uncumbered or worrying about tripping over cords. 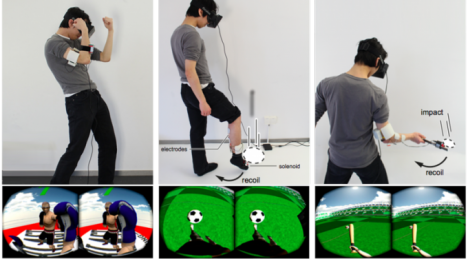 Examples include: feeling the impacts of soccer balls bounced on legs or of punches blocked in a boxing game. “Of note, Impacto isn’t a simple vibrate motor shoved into a plastic box. The device combines a haptic vibration engine with electrical muscle stimulation to actually create a sensation of pushing or pulling, therefore more closely mimicking the feeling of contact from actual physical objects.”

“The key idea that allows the small and light impacto device to simulate a strong hit is that it decomposes the stimulus: it renders the tactile aspect of being hit by tapping the skin using a solenoid; it adds impact to the hit by thrusting the user’s arm backwards using electrical muscle stimulation,” the team, led by Pedro Lopes, said in an abstract covering its research paper on Impacto. 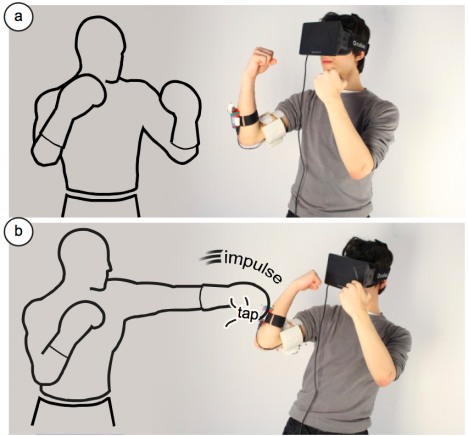 The next step: creating additional add-ons for torsos and other areas of bodies, all toward the eventual goal of a full-body suit for maximum effect. Applications go beyond entertainment and gaming as well – eventually systems like this could allow for remote scientific or medical procedures with haptic feedback for delicate situations.