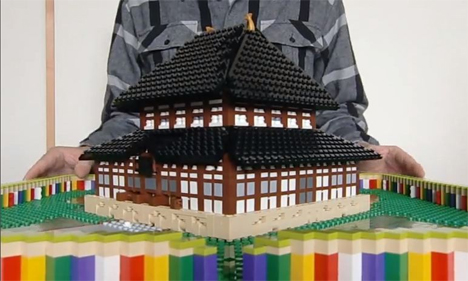 Building with Legos is always fun, no matter how old you are. But unless you’re an elite expert builder, all of your creations are blocky and square. That’s still fun, but imagine what you could do if you were as talented as a Japanese builder who goes by Talapz.

Talapz makes incredible pop-up works of Lego art. They start out looking like regular, if quite ornate, boxes built of Lego bricks. But when the maker opens them, they reveal spectacular sculptures. Above, an almost-unbelievable fold-out temple complete with reflecting pools and a pathway to the front door.

The above build, first posted on YouTube in 2009, is modeled on the Kinkaku-ji temple in Kyoto, Japan. After the short demonstration of its movement, the video shows the truly impressive details involved in making the temple fold and unfold inside its case.

This incredible masterpiece shows a scene of a dragon being slayed. The form of the dragon is large and splayed out, making it less stable than the buildings during the folding and unfolding process. Still, the remarkable sculpture holds together and opens up into an amazing battle scene before folding away into a seemingly impossibly small hinged box made of Legos. Check out Talapz’s YouTube channel for all kinds of awesome Lego craziness.