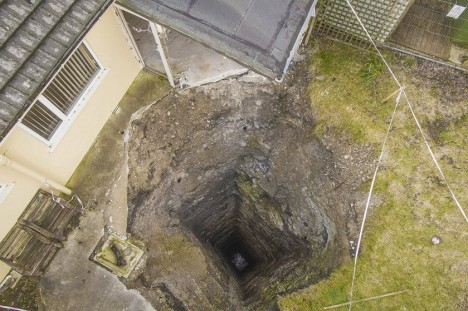 A recent sinkhole that suddenly appeared in the backyard of a home in Cornwall is a worrying indicator of hidden risks below seemingly ordinary streets and yards. This particular shaft, which drops 300 feet to the water (and possibly hundreds more below the waterline) looks man-made for a reason: it is really a remnant of the regional tin mining industry, simply covered, boarded up and built over when they were finished with it.

But this is just the tip of a mostly-hidden iceberg, per Subterranea: “As mines close, companies put very large blocks of timber, often old railway sleepers, across shafts and backfilled them, thinking this would be safe. Gradually all evidence of the engine houses and covered shafts disappeared from view and memory and in the past builders assumed there was nothing there. Had they consulted old maps they would have known about the shaft. The timbers rotted over the years and collapses like this often happen after long periods of rain, which they have had in this area.” 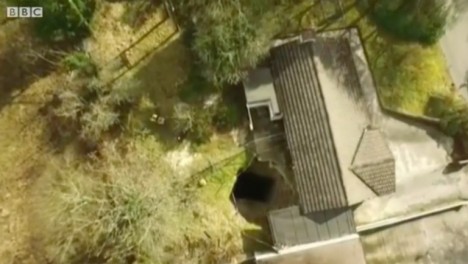 Sand, salt and chalk mines across Britain and around the world pose underground risks to everyday city dwellers, who assume their homes are built on solid foundations. Poor record keeping and time conspire to make these threats all the more impossible to anticipate without using ground-penetrating radar and other technologies in advance. Often, things remain stable for years, decades or even centuries, then give way during severe rains or floods. When buying a home in an area with a history of mining, be sure to check it out as best you can in advance.

See more in Weird Science or under Science. July, 2016.