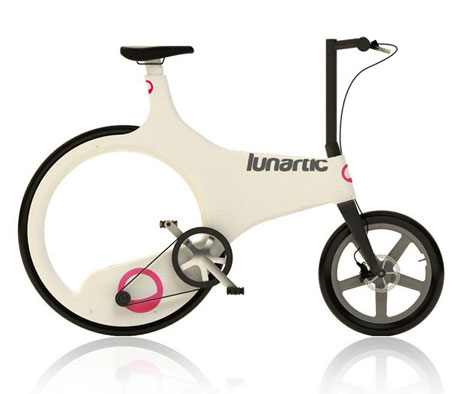 Leave it to design students to completely rethink everything about the bicycle and come up with a ridiculously unique concept. The Lunartic Cycle is a design and technology final-year project from Luke Douglas. The bike’s shape is unlikely and its function is simple but brilliant.

The most noticeable element of the Lunartic’s design is the differently-sized wheels. Unlike early bicycles that featured a gigantic front wheel and small rear wheel, the Lunartic sports a smaller front wheel and a big wheel in the back. The result looks kind of weird, but contributes to a significantly smaller profile than traditional bikes.

The prototype bike is also conspicuously missing a chain. That’s because it runs instead on a cleaner, sleeker belt drive. The rear wheel is hubless, giving it a rather futuristic and impossible appearance. 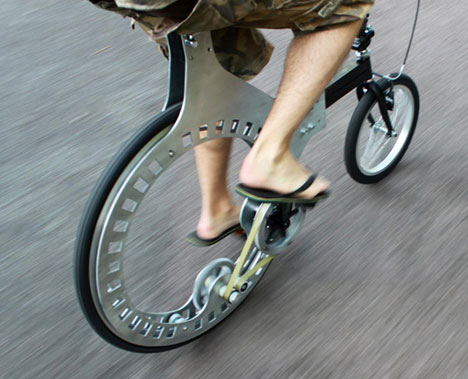 But it’s totally possible. Douglas developed a prototype of his design to prove its function. The large rear wheel creates stability while the smaller front wheel makes the cycle more maneuverable. Although the design is fabulously unique and makes us want to jump on one immediately, the designer admits that more work is needed before it becomes a real, marketable product. Which makes us dig Luke Douglas and his design even more.

See more in Bikes & Cycles or under Transportation. August, 2010.