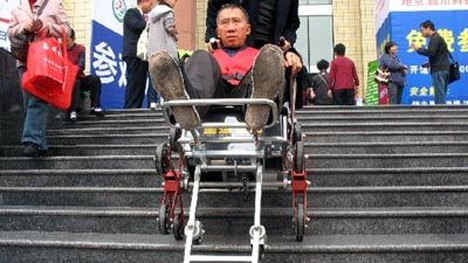 In every inventor’s life, there’s a moment of clarity when he sees a problem and decides to solve it. For Beijing retiree Li Rongbiao, that moment came when his wife broke her leg and he struggled to get her up and down the stairs to their fifth-floor apartment. He realized how much easier the transportation would be if there were a wheelchair that could go up and down stairs. Despite having no training in or knowledge of mechanical engineering, Li set out to invent such a chair.

He took six months to teach himself all that he would need to know, then spent another six months designing the chair itself. He cashed out his pension, withdrew all of his savings, and sold his apartment for approximately $70,000 – all to fund his project. He was questioned by police who assumed that he was building explosives in his workshop. But he stuck with the project to develop the Walking Chair. Since he showed a prototype at one of the largest disability product shows in China., orders have been pouring in. He’s made and delivered 30 chairs so far and has a backlog of orders for over 300 more. 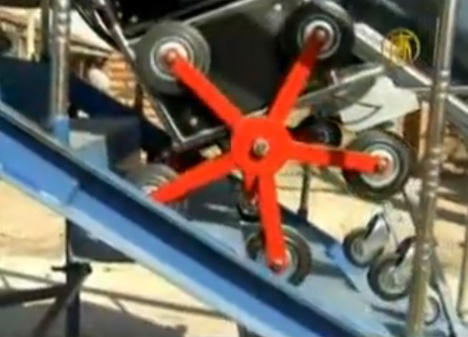 The chair can’t walk up and down all on its own just yet; it requires minimal guidance from a helper. Li says that the next generation of the chair won’t require any assistance to go up and down stairs. Because of his success, he’s been able to hire several workers to help him produce the hand-made chairs, each of which take about two days to complete.