10,000+ Subscribers
Spy Game: Mod Your Printer to Be a Secret Agent Machine 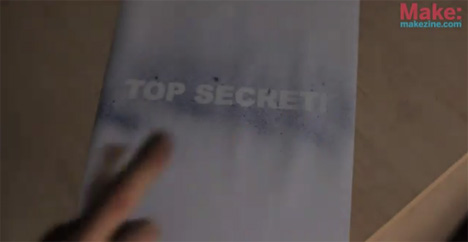 Sending secret messages is one of those things that we are all fascinated with for at least a little while. Whether that fascination comes in childhood or when we’re full-fledged grown-up secret agents, it’s fun to communicate with fellow spies. Make has released a relatively simple way to make your printer produce covert spy messages so you can spread the word about upcoming missions or gossip about the boss.

Using a few simple tools, some items commonly found around the house and in a grocery store, and a hefty amount of patience, this mod produces a printer that prints with invisible ink. There are two ways to reveal the hidden communique once it has reached the intended recipient, but if it should fall into the wrong hands it will look like nothing more than a blank sheet of paper. Very clever.

See more in Do It Yourself or under Technology. April, 2011.