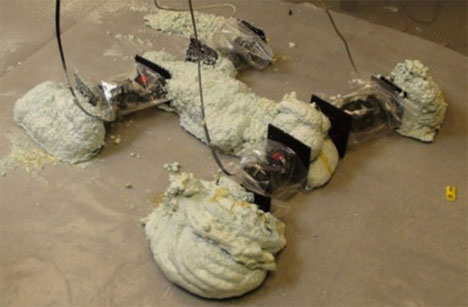 It’s kind of inconceivable that, after all of the movies about self-replicating robots that take over the world and enslave humanity, we humans are still trying to build self-replicating robots. But what would our world be without a hefty measure of self-destruction, right? So with that in mind, the Modular Robotics Lab at the University of Pennsylvania has initiated the downfall of mankind with their FoamBot which builds more robots – which will (we’re assuming) eventually be your, our, and everyone’s overlords.

To be completely fair, the FoamBot still requires some human intervention to build other quadruped ‘bots – it’s nowhere near autonomous. The created robots could be purpose-built based on whatever job needs to be done at the moment. The little robotic modules are laid out in specific configurations based on the task at hand and the FoamBot uses spray foam to hold the modules together. In theory, this could mean that a case of robotic modules and a single FoamBot could be shipped to a remote location (like…space?) and a whole army of different types of bots could be built on-site.