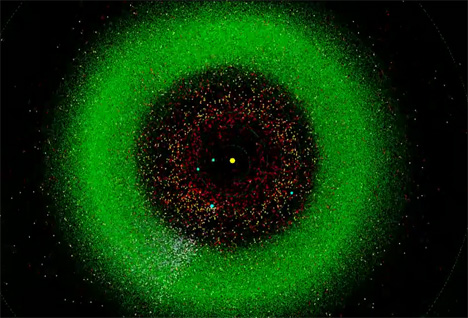 There’s no doubt that as our astronomical observation equipment has gotten more advanced and powerful, we’ve been making new discoveries at a startlingly fast rate. But it’s hard to really picture just how many of those discoveries have been made in the last, say, 30 years without some type of visual aid. Scott Manley recognized this problem and set to work creating one of the most truly breathtaking science videos we’ve ever seen. It uses data from the Minor Planet Center and the Lowell Observatory to map out every asteroid discovery from 1980 to 2010.

The video shows in sparkling detail how many asteroids have been were discovered in a 30-year period in the order they were discovered. All the while, the solar system just keeps chugging along. It is fascinating to see discovery patterns emerge, especially near the end of the video where there is a very clear and unusual pattern. The newly-discovered asteroids also seem to be further and further away from Earth as the years progress, which can be attributed to newer and more powerful telescopes being used to spot the minor planets.