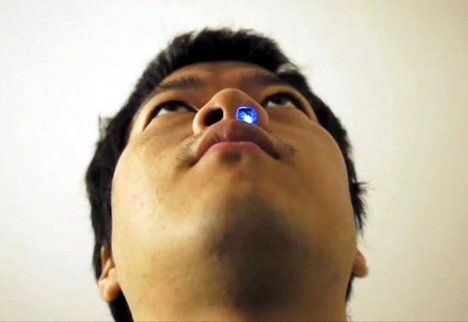 One of the reasons we love Japan is that it seems to be a never-ending source of truly bizarre inventions that make very little sense to anyone. Noda Akira‘s LED nostril light does not disappoint; it is one of the weirdest designs to ever come out of any country. He says that when it is in his nose, it feels just like “dried snot.” Not exactly an encouraging advertisement.

The invention is exactly what it sounds like: it’s a little LED that fits inside your nostril. It has a heat sensor that causes the LED to light up every time you exhale, causing an eerie blue light to emit from your nose. Why? Who nose? At least it’s a bit less creepy than packs of girls roaming the streets with light-up smiles.