10,000+ Subscribers
Smile, or Else: Hat Stabs Your Head When Your Smile Fades

Do you find yourself or someone you love scowling a little too often? Maybe it’s time to introduce a little negative reinforcement. UCLA grad student Lauren McCarthy has come up with an ingenious, if painful, way to make the world a happier place: drive a metal spike into the head of those who dare to stop smiling. Her hilarious Happiness Hat is the first part of a planned series of tools for improved social interaction.

The hat operates with a band sensor that touches the cheek to measure the wearer’s facial expression. When you smile, you can go about your life normally. But let that smile fade and a servo motor moves a metal spike into your scalp. The degree of movement of the spike is inversely proportional to the degree of your smile; in other words, the smaller your smile, the bigger your punishment. 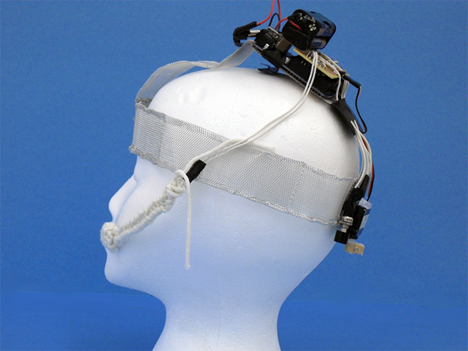 The hat, part technological exploration and part social experiment, would use conditioning to train wearers to smile more often. According to McCarthy, seeing another person smile triggers the smile response in ourselves, so one person being forced to smile under threat of pain could actually get a bunch of people to smile for real. But we’re not so sure if seeing that forced smile would make us happy, or prompt us to be very afraid of hats.

See more in or under Various Gizmos. November, 2009.