10,000+ Subscribers
Sewage-Eating Robot Fuels Itself For a Week at a Time 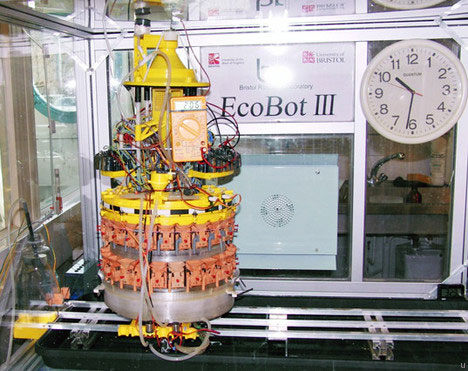 If we’re ever to build a society of autonomous, fully-functional robots that don’t need us humans to supervise and control their every move, we’re going to have to teach them to fuel themselves. The Ecobot III brings us a step closer to living in a world of self-feeding robots that will (probably) eventually overthrow the reigning humans and take over Earth. It’s a small robot developed at the Bristol Robotics Lab in the UK that takes meals and sips of water, extracts energy from the food, and expels waste through an artificial digestive system.

The Ecobot III isn’t the first robot to fuel itself by eating food, but it is the first to deal with the – ahem – byproducts of that fuel. The bot can keep itself going for an unprecedented seven days with a nutrient-rich solution and little sips of water, emptying its gut once a day. Currently, the system is rather underdeveloped and can only extract around one percent of the available energy from the food. The bot is slow and inefficient, but the researchers hope that soon it will be able to cope with a meal of flies.  But don’t worry about it developing a taste for human flesh anytime soon – that development will take years to come about.

See more in Robotics or under Technology. July, 2010.