10,000+ Subscribers
Scooter on a Half Shell: Lego Wheels Get Turtle Moving 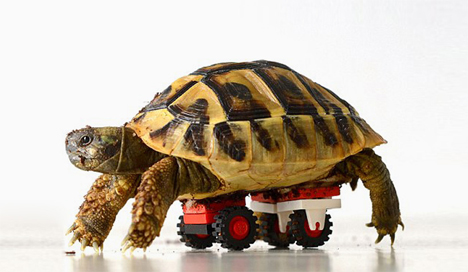 Prosthetic devices for humans are easy enough to obtain, and they’re getting more advanced every year. But animal prostheses are a little harder to find, so creative vets often find themselves making up their own solution for injured animals. 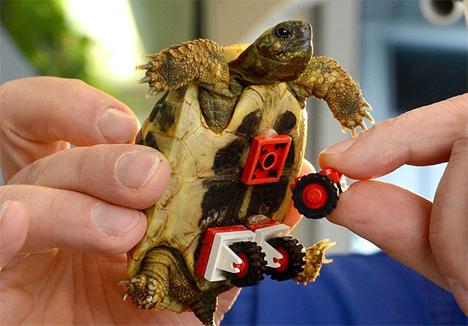 Blade the tortoise was having a hard time in life: a growth disorder made it difficult for him to hold himself up, and he wasn’t able to move around normally. His owner took him to Dr. Carsten Plischke, a vet who had a novel idea for getting Blade up and running. (The video below is in German but has some great footage of Blade scooting around.)

Dr. Plischke fitted Blade with two sets of Lego wheels on the underside of his shell. The wheels lift Blade off of the ground just enough that he can move his legs to scoot himself around. This isn’t the first time Lego wheels have been used to give shelled friends a mobility boost; another German vet used a similar technique on a turtle missing a leg. 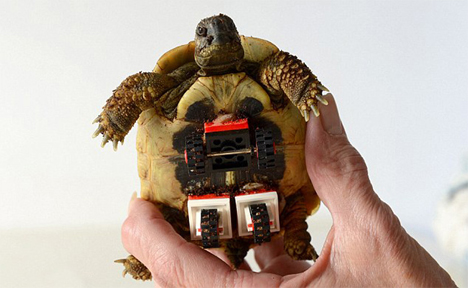 The makeshift Lego wheelchair is only a temporary measure; the vet says that Blade will eventually regain full use of his legs and be able to walk like any other tortoise. Until then, he gets to ride around on one of the sweetest animal mobility scooters ever built.

See more in Cybernetics or under Technology. December, 2014.