Air pollution is a blight on cities around the world, and it isn’t just a temporary irritation. A recent study found that air pollution increases the risk of strokes and heart attacks even after short-term exposure. The best and longest-lasting way to combat the problem would be to drastically cut down on the use of pollution-causing fossil fuels, but since that will take a considerable amount of time to accomplish, the next best thing is to clean up the pollution in the air.

A company called Boral Roofing wants to do that by providing customers with “Smog-Eating Tiles.” The roof tiles are coated with titanium dioxide, a material which breaks down nitrogen oxide in the air and turns it into calcium nitrate, a harmless compound that washes off of the roof with normal precipitation. As an added bonus, that calcium nitrate is a common garden fertilizer so your plants might thank you for it. 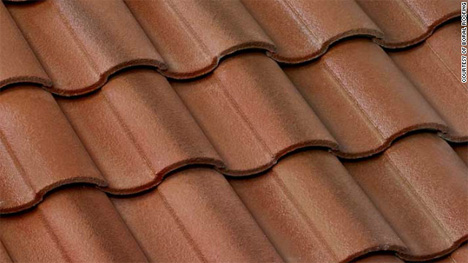 The company claims that a 2,000 square foot house with the tiles can “eat” enough smog in one year to balance out 10,000 miles of driving in a car. Although the technology has been around for a while in Europe and Japan, it is just now making its way to the roofs of the US. If you want to tile your roof in these smog-hungry slabs, it will cost you around $600 to $1000 more than the same job with regular tiles.

See more in New Materials or under Science. May, 2012.