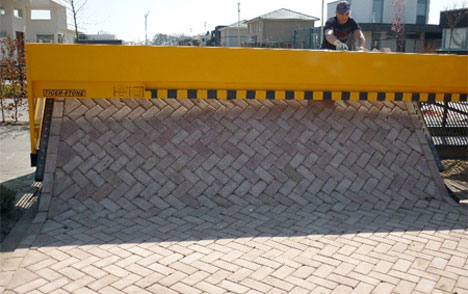 What if building new roads were as easy as laying laminate flooring in a house? What if laying a new section of road no longer took a big crew and days upon days of slow, painstaking work? A Dutch company has invented something they call Tiger Stone to make the tedious work of building roads quicker and more efficient.

The Tiger Stone machine basically prints brick roads with a minimal crew and only a tiny amount of effort from the workers. In the demonstration video, a crew of three workers feeds bricks into the machine as it rolls along the already-prepared area. The bricks come out in a carpet-like configuration to lie down atop the dirt and create an entirely new brick road. 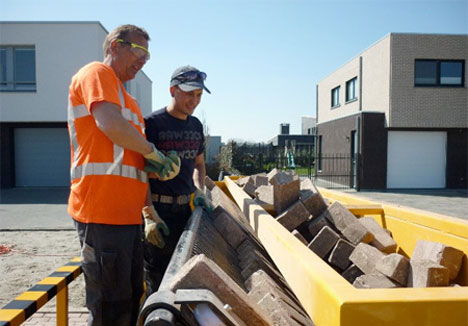 Tiger Stone can lay up to 400 meters of new road a day with far less stress to the workers than traditional paving methods. According to the company, the machine is surprisingly quiet and extremely safe for the workers. There is even a detachable roof to go over the crew so they can work in all kinds of weather conditions.

The machine stays between the curbs using sensors to guide it. Different patterns are possible and it’s easy enough for workers to change the pattern by simply altering the way they feed the bricks into the machine. When it’s time to move on to the next job, the Tiger Stone assembly is small enough to be hauled behind a regular pickup truck.

See more in Futuristic or under Technology. December, 2010.