10,000+ Subscribers
Ride the Bullet: Train Lets Riders Off and On With No Stops 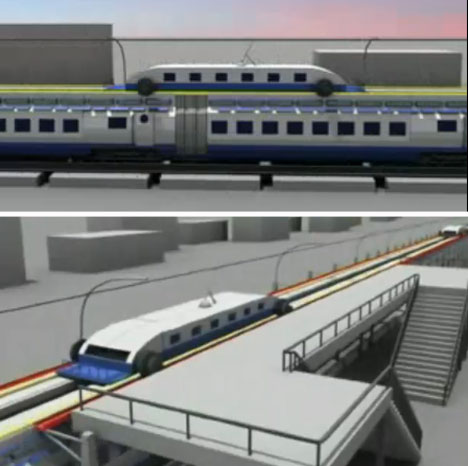 If you’ve ever been in such a hurry that you found yourself cursing even the five minutes at every train stop, this concept might actually make you excited to ride the train. The Chinese concept bullet train lets passengers embark and disembark without ever stopping through the use of a “connector cabin.” The passenger compartments of the train are normal, but when passengers want to get off they simply climb the stairs to the connector cabin. When the train rolls through a station, the connector cabin is sloughed off and a new connector cabin full of embarking passengers is picked up.

The above video is in Mandarin (with a scary echo), but the basic concept is simple to ascertain even if you don’t speak the language. The concept would reportedly save the average commuter around 2.5 hours of travel time. There’s not much information in English about where the concept originated, but it seems like a sound idea for cutting down on travel time while keeping up the convenience of train travel.

See more in Mass Transit or under Transportation. April, 2010.