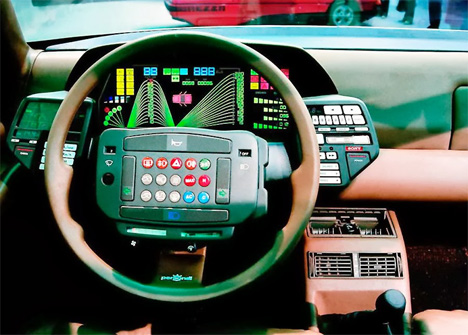 Each generation has its signature popular culture atmosphere, and in the 80s part of the popular culture involved flashy cars and flashy interiors to match. The TV show Knight Rider inspired car companies to create dashboards that were almost as brightly-lit and futuristic as KITT 2000, the super-advanced talking car and secondary star of the aforementioned show. Above: the incredible Lancia Orca, with so many things happening on the digital dashboard and button-filled steering wheel that it would almost require a special class to learn all of the features.

The colorful displays on the Trans Am (left) and Corvette (right) look more like decorations than useful tools for keeping track of car-related information. But, provided that your eyes could adjust from looking out at a bright road to looking at these garish dashboard displays, they did contain all of the information needed to drive safely.

The Citroen BX Digit, on the other hand, looks so much like a video game that it would be hard to keep your eyes off of it long enough to watch the road ahead.

On the tamer side of this futuristic dashboard trend was the Alpha Romeo 90 QO. The oddly-slanted speedometer is actually rather cool, but we imagine it would be hard to find the little green light indicating your speed when there is any other source of light present (like the sun).

Buick was really devoted to this trend, as seen in this 1990 model on the left and 1989 model on the right. The 1989 model even featured a touchscreen computer in the dash, something that we would find pretty mundane these days but which would have been extraordinary then.

Two Citroen models, the Karin (on the left) and the Xenia (on the right) feature some rather baffling design choices. The steering wheels and their bizarre shapes are just the beginning. With all of those buttons, would you be able to keep your eyes on the road while searching for the right one?

See more in Retrofuturistic or under Vintage & Retro. September, 2013.