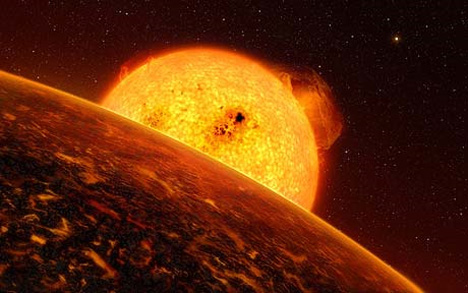 Living on Earth doesn’t seem so great some days (blizzards, tsunamis, and earthquakes come to mind) but even the worst day on Terra doesn’t come close to the nightmares that await you on COROT-7b. The small exoplanet was discovered by the European Space Agency’s telescope COROT in February 2009, and researchers at Washington University in St. Louis later mapped out its hellish atmosphere. 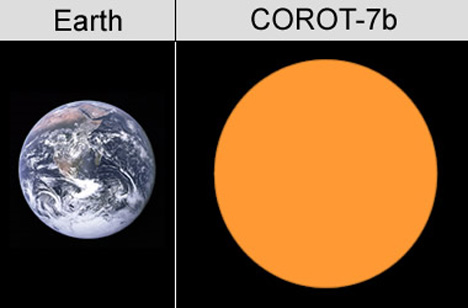 COROT-7b is only a little bigger than Earth, but couldn’t be more different otherwise. It is extremely close to its sun – about 23 times closer than Mercury is to our sun – and is gravitationally locked, meaning that one side is always facing the sun. This makes for unimaginably hot temperatures on the light side (over 5000 degrees Fahrenheit) and extreme cold on the other. Though scientists can’t be sure what the surface of the planet is composed of, the high temperatures would cause even rocks to boil and vaporize. The researchers believe that the atmosphere on COROT-7b is laden with minerals that would rain down in pebbles and rocks if a cold weather front moved in. 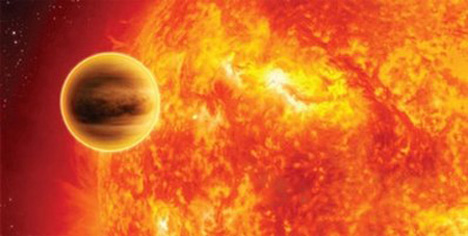 As nightmarish as COROT-7b is, it doesn’t share the inevitable doom of WASP-18b. The giant exoplanet shouldn’t even exist, based on what scientists currently know about stars and gravitational pulls. The planet is far too close to its star, and within a million years will be swallowed up by it. Its close proximity to its star means that it completes an entire orbital period – a “year” – in less than one Earth day. Because it’s so large (about 10 times the size of Jupiter) and so close to its star, it’s causing massive plasma waves on the star which are degrading the planet’s orbit even further. Studying WASP-18b over the next decade will help scientists to understand why it’s so close to its star but hasn’t yet been devoured.