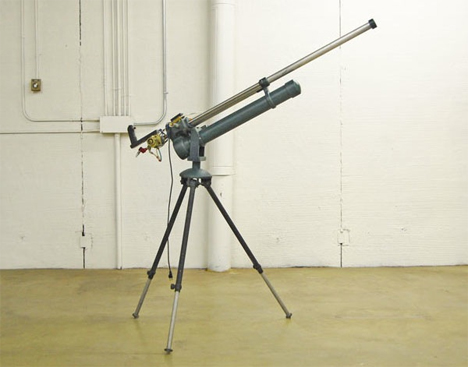 We’ve known some “friendly” ping-pong games to end in ruined friendships, obsessive rematches, and black eyes (those paddles hurt!) but until now, we’ve never known of any ping-pong-related fatalities. That’s probably going to change now that [what we assume is] the world’s most lethal ping-pong gun has been brought to life. The contraption was made by Denver artist/inventor Ron Kessinger and uses compressed air to shoot water-filled ping-pong balls so hard that they smash through particle board. That’s one way to convince your other half that you need to replace that old Ikea dresser.

Ron’s invention is sort of like a potato cannon, but with slightly different specs. Shooting empty ping-pong balls obviously wouldn’t cause the type of satisfying destruction that guys who make projectile “toys” enjoy, so obviously he injected them with water to make them heavier. When the gun was demonstrated at a recent Denver Maker Meetup, Ron dazzled the crowd by shooting balls through pieces of drywall and particle board.

The gun works off of a standard wall outlet and has a 14-shot magazine. But really, one shot will probably be enough to settle whatever ping-pong dispute you manage to get yourself into.