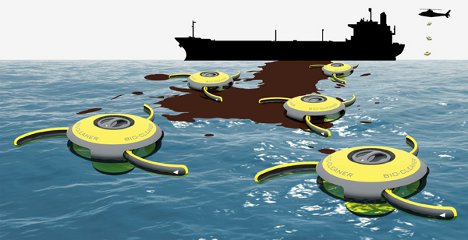 The sad aftermaths of marine oil spills have led a lot of designers and environmentalists to come up with some pretty out-there ideas for dealing with such tragedies. The Bio-Cleaner system is definitely a pie in the sky kind of concept, but if the technologies it employs were readily available it would be an invaluable asset to oceanic oil cleanups. 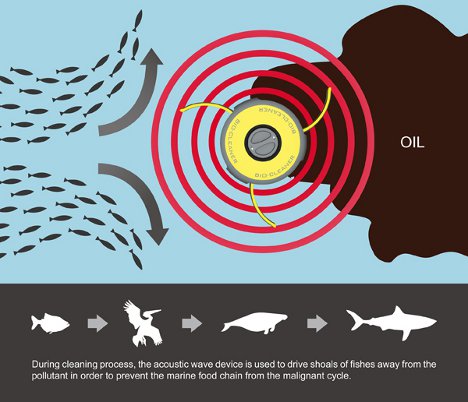 The Roomba-like device floats on the ocean after being deployed from a helicopter or boat. It can track the source of the spill and focus on cleaning up in that direction. In the center of the ‘bot sits a chamber full of oil-hungry bacteria. As the oil sloshes into the device, the bacteria degrade the oil and clean ocean water is expelled.

An acoustic warning device would warn sea animals away from the danger zone, although we aren’t sure many fish would be tempted to investigate these weird bobbing robots in the first place. By keeping fish away, the herd of ‘bots would protect the integrity of the marine food chain. After the cleanup is finished, the Bio-Cleaners can simply be collected by hand from a boat, according to the video. 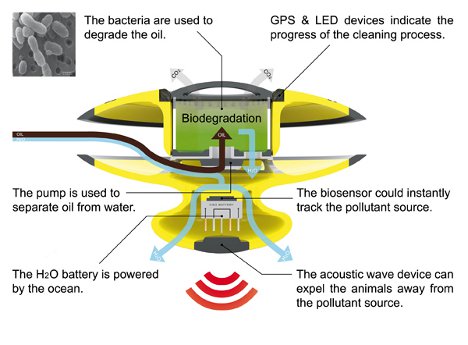 Each Bio-Cleaner is powered by an H2O battery, which draws energy from the motion of the waves. This is one part of the concept that is actually possible (and indeed, already in use) today. Is this a device that will be built and ready to deploy as soon as the next oil spill happens? Absolutely not. But it’s a thoughtful idea with plenty of positive points that may someday be implemented in some form.

See more in Robotics or under Technology. August, 2012.