Steampunk mods are a dime a dozen these days, but it’s rare to see one that actually makes us want to pick it up and play with it. This Gameboy case mod from customizer extraordinaire Thretris is beautiful, well-done and oh-so-begging for us to plug in a cartridge and start playing. 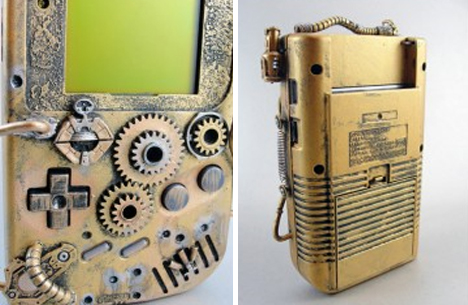 The entire case has been painted in a lustrous distressed gold and adorned with gears, springs and tubes to heighten the Victorian feel. The red LED has been switched out for an orange one, and it even boasts a pro sound mod to make the sound output louder.

Thretris says this mod took him about a week to complete, and judging from the way he touches it in the above video, he’s pretty fond of it. According to his website he may even consider selling it, so if you’re in the market for the awesomest steampunk gadget we’ve ever seen, hop on over there – or take a look at his gallery and see if you can figure out how to make one of your own.