The technology contained in personal computers keeps improving, but the basic design of desktop and laptop computers remains the same. Why is that? Maybe it’s because their current forms are already optimal for everything we use them for. But many enterprising designers think that the sameness is just because no one has yet bothered to think outside the box. 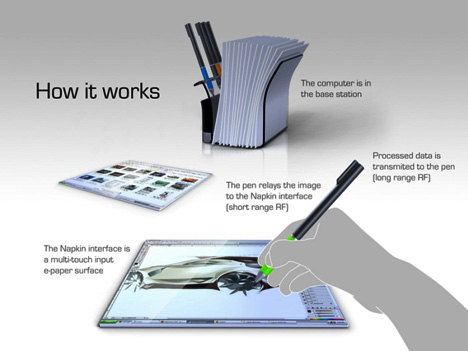 Great ideas often take shape on napkins, right? Avery Holleman’s Napkin PC concept runs with that idea. The base unit, which holds “napkins” (touch-sensitive e-paper surfaces) and pens, is actually the computer. Users use the specially designed stylus to doodle their ideas, which would remain indefinitely on the napkin surface until erased. In industries where impromptu doodling in meetings leads to big ideas being implemented, a design like this could inspire and encourage brainstorming. 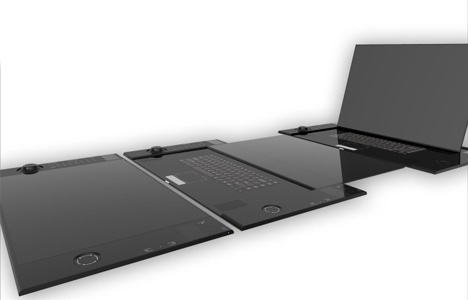 The Canvas concept from Kyle Cherry shares few characteristics with other PCs and laptops; when it’s open in the tilted-screen position, it bears the familiar screen-and-keyboard setup of a laptop. But the screen can continue to tilt until it’s flat against the table – or just close it and have another work surface entirely. The concept is meant for designers and artists who need a unique workspace to work on their digital projects. 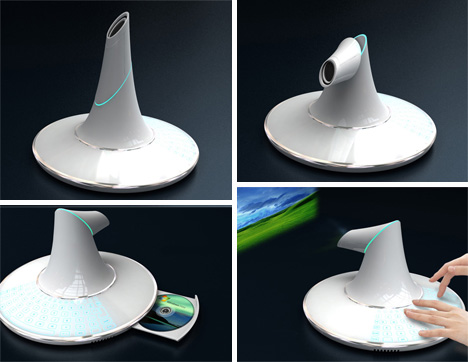 You probably wouldn’t peg the B-membrane as a computer on first look…or even second or third look. But the weird UFO-looking device, designed by Won-Seok Lee, is indeed a mobile computer that can project images onto any flat surface, eliminating the need for a monitor. This projecting technology is definitely something we could get used to if it ever makes it to production. The B-membrane’s keyboard is a touch keypad that disappears when it’s not needed. And when you’re not using the unit as a computer, it doubles as a mood light. Far out.

See more in Unbuilt Concepts or under Technology. January, 2010.