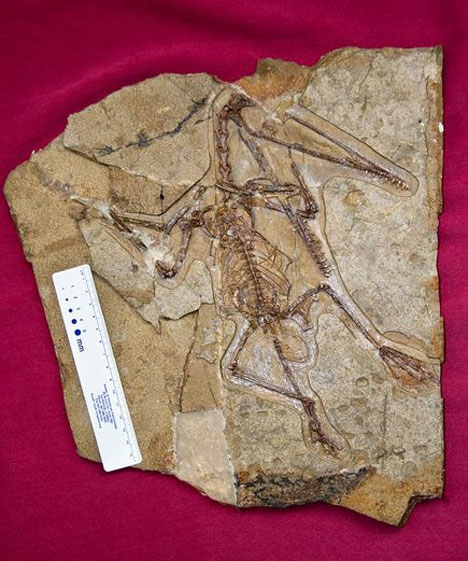 A pterosaur fossil recently found in China’s Liaoning Province is giving scientists a whole new idea of the reproductive details of the long-extinct dinosaur. For the first time ever, archaeologists are able to conclusively determine the gender of a pterosaur thanks to an egg found right next to the fossilized dino’s body. Scientists believe that the pterosaur was an expectant mother that suffered a broken wing, fell into a lake and drowned. As the body decayed, the egg was expelled from the mother’s body thanks to building gases and pressure in the carcass.

Now, thanks to the fossilized mother and egg, scientists can now differentiate male and female pterosaurs with confidence. The female specimen has a larger pelvis than male fossils and lacks the distinctive head crest that male pterosaurs sported. Neither characteristic could be definitively linked with either gender previously. But the mother-and-egg fossil is also shedding new light on how baby pterosaurs actually began their lives: they hatched from soft eggs, like reptiles, rather than hard-shell eggs like birds.