10,000+ Subscribers
1 Pedal to Drive Them All: Brakes + Gas Combined for Safety 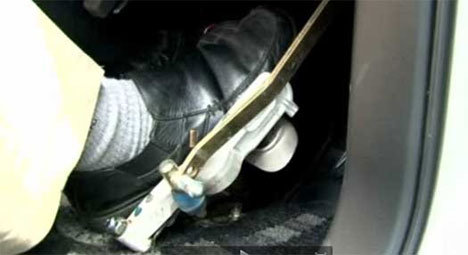 For twenty years, a lone Japanese inventor has been working on a project that he believes could change the world: a single pedal that would control both acceleration and braking. The pedal activates the brakes with downward pressure and accelerates the car when the foot moves to the right. Masuyuki Naruse has been toiling away on his idea since the day he mistakenly stepped on the gas pedal rather than the brake, narrowly avoiding an accident. The same problem causes thousands of accidents every year in Japan according to a recent study, and Naruse believes that the unique design of his pedal could save untold numbers of lives.

Of course, for those of us who have been driving for quite a while, the combined pedal would be challenging to get used to. Years of muscle memory would have to be re-learned, and we may still be tempted to stomp on the traditional brake pedal when faced with an impending accident. Regardless, Japanese authorities appear to be behind the idea: they have already approved the gadget’s installation on about 130 individual vehicles.

See more in Cars & Trucks or under Transportation. February, 2011.