10,000+ Subscribers
Mind the Creases! 6 Uber-Geeky Ways to Fold Your Shirts 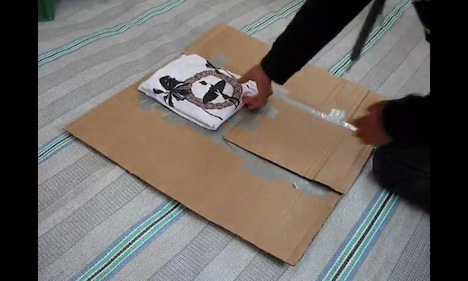 With the multitude of things to geek out on in our tech-rich world, you wouldn’t think that folding shirts would be high on the list. But apparently there is a whole sub-culture of people who just can’t resist a gimmick or gadget to help get their t-shirts folded into the perfect little package. The folks over at core77 were nice enough to compile a whole list of YouTube instructional videos all designed to help you pwn your laundry.

The video that (allegedly) started it all is this one: “Japanese Way of Folding T-Shirts!” It’s truly magical, and you might actually have to watch it a few times before you understand what in the world is happening. Once you get the hang of it, though, your shirts will thank you.

This guy (an engineer, of course) upped the ante by adding a homemade cardboard t-shirt folder into the mix. It seems to take just as long to fold a shirt with the cardboard gadget as it does to ninja it folded like the Japanese method, but admittedly it does look much geekier.

But what if you’re geeky and way too lazy to move your arms that much? You could invest a few hours into building a K’NEX folder like the one above. It takes a bit longer, but at least you get to move a little less…you know, after the hours it takes to build the machine in the first place.

This machine was built for a science fair and boasts the highest volume of all the homemade t-shirt folding hacks. Although it’s noisy, anyone who has ever worked in a clothing retail store would agree that a little noise is better than folding hundreds of shirts by hand.

This professional folding machine is highly disappointing: it doesn’t seem to fold much faster than the homemade versions but requires just as much prepping by human hands.

And this monstrous machine offers the ultimate in t-shirt folding technology with a minimum of human interaction. The Thermotron folds the shirts, puts in the stiffening cardboard pieces and wraps them in protective plastic. If the corner laundromat had one of these, we’d sure do laundry a lot more often.