Using magnetic fields to hover a small LED disk, this little flying saucer lamp lights up when you slide the disk into place, then dims when you remove it. Functional for sure, the real draw of this design is probably in the wow-factor – impress your guests with science bordering on magic.

The LUNALUXX lamp by Elivatix is sleek and minimal, a curved steel bar connecting the white shade piece above and the lamp base below, but the real magic lies in between – current pulsing through the system at 1,000 times per second to keep the disk in place and lit. You can poke and prod the disk and it will return to its default position in midair unless dislodged manually by physically grabbing and removing it.

From the designers: “It is truly the first of its kind featuring a minimalistic design, generating a smooth atmospheric light with a futuristic touch.  By combining both magnetic suspension and remote-phosphor lightning technologies, a light emitting disc is freely suspended in mid air!” 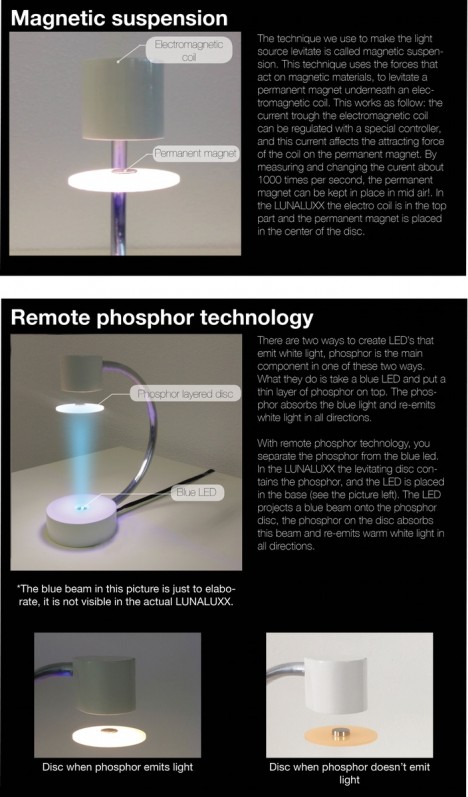 More on the technology: “The design also uses remote phosphor technology to administer its light through two LEDs. In the base of the lamp, a blue LED shines up onto the LED disk, which is layered with phosphor. When the beam hits the layer on the disk, the blue light is absorbed and the disk radiates white. This twofold technology allows for a high energy efficiency, with the blue LED consuming only 2-3 watts of power, whilst the LED disk seems to glow with 15-20 watts of light.”