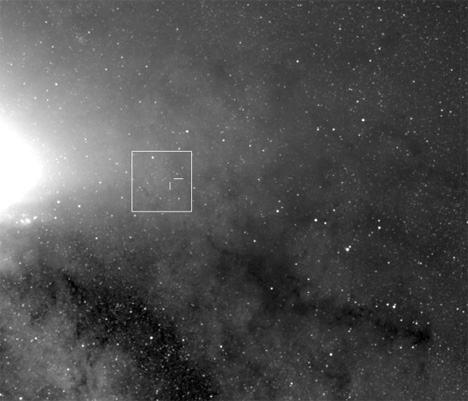 Usually when NASA catches something awesome happening in space, we only get to see artist drawings or animations of the newsworthy event. At best, we might get a photograph. But this time NASA’s STEREO-B spacecraft managed to catch actual video of a beautiful thing happening way out there in space: a nova called Sagitarii 2012. Taken over the course of four days (April 20-24, 2012), the video shows a “new star” appearing and then fading away. It’s no Hollywood blockbuster – it’s far away and kind of blurry – but knowing that there’s an amazing series of events that caused that little blip of light makes it very, very cool.

Unlike a supernova, which is the death of a massive star, a nova happens when one half of a binary pair accretes a large amount of material from its red giant twin. Eventually the star, a white dwarf, can no longer contain all of the new material and fusion occurs, creating a gigantic space explosion. STEREO-B was just cruising along watching the sun when it happened to catch the awesome nova by sheer coincidence. There’s no need to worry about the nova affecting Earth; although NASA isn’t sure exactly how far away Sagitarii 2012 is, the explosion wasn’t strong enough to cause trouble here on Terra (sorry, doomsdayers).