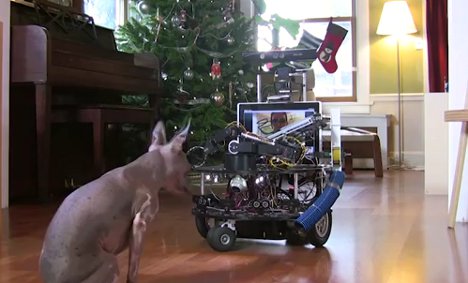 Animal lovers, we’re sure your hearts will go out to Darwin. His human, Jordan, works at Microsoft and puts in some pretty long hours. Darwin gets lonely being all alone during the day, so Jordan decided to put some of his programming knowledge to work building a robotic playmate for his little dog. It’s called DarwinBot and it uses Microsoft’s Robotics Developer Studio 4 tool as a foundation.

DarwinBot features a kibble dispenser, ball launcher, ball recovery arm, two cameras and two-way audio and video for constant communication. The bot is controlled on Jordan’s side by an Xbox controller. We have to wonder what Jordan’s cubical neighbors think of him playing remote games of fetch with his dog all day – and judging from the video, little Darwin isn’t entirely in love with his robotic friend. Still, we have to applaud the human in this story for going the extra mile to keep his little animal friend happy.

See more in Robotics or under Technology. February, 2012.