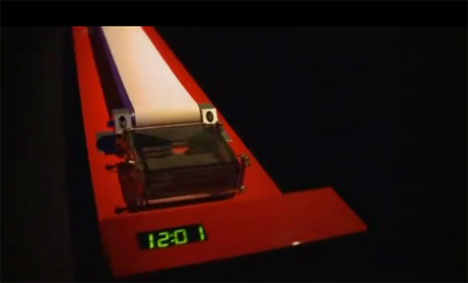 So you say your bedside alarm clock positively eats batteries? Well, this one really is a killer: it attracts houseflies and eats them to power itself. The white strip is coated in honey which attracts and then traps flies. They can then be dragged slowly down to a blade that scrapes them into a microbial fuel cell where they’re turned into power for the digital clock. It’s rather like a Venus Flytrap in its function, though the fuel cell can only provide enough power for the clock and not the motor.

The terribly creepy invention isn’t even the most disturbing of the gadgets thought up by James Auger, Jimmy Loizeau and Professor Chris Melhuish. They also created a table that attracts mice with little pieces of cheese and slaughters them with an internal guillotine. Animal-rights advocates will be understandably outraged, but the designers are attempting to make a contribution to the future of robots by developing machines that can power themselves. Robots that can eat insects rather than rare and expensive fossil fuels may very well be the future of the world. And we, for one, welcome our new fly-eating robot overlords.