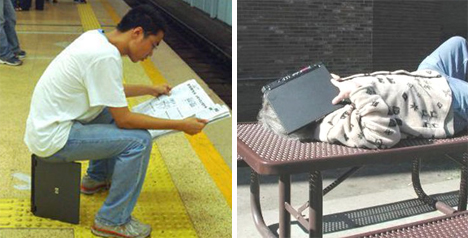 Shutdown Day is a concept started in 2007 by a group of friends in Montreal who noticed they were spending far too much time on their computers. They pledged to shut down their computers for a whole 24 hours and spend that time reconnecting with family and friends, getting out and doing physical activities, and just enjoying the computer-free day. Their concept grew quickly, and by Shutdown Day 2009 the project was getting international attention from the press.

To get people behind the idea of going without their beloved computers for a whole day, the crazy geniuses behind the idea made a hilarious video showing some of the alternative uses for your unused laptop. (Copycats beware, though – don’t count on your laptop actually turning back on the next day if you engage in any of these shenanigans.) 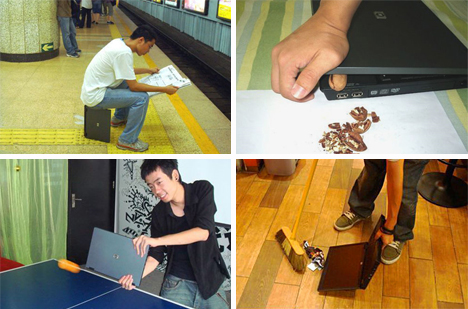 Now there are evenÂ  more ways to abuse your poor laptop on its one day off per year – or anytime you feel like getting some revenge. The crew at Uncovering.org bringÂ  you an entire photo series detailing just what you can do with that expensive piece of technology while you’re not using it to compute. Why not turn it into a handy stool to make your wait for the train more comfortable? Or use the sheer size and weight of it to crack nuts or wail on a ping-pong opponent? If you’re more domestically inclined, try using its unique design proportions to sweep a load of garbage off of the floor! 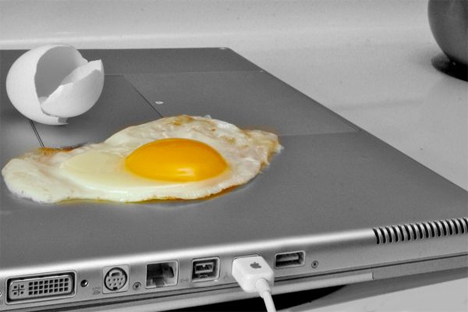 But if you’re willing to cheat just a tiny bit on the “shutdown” part, you could always turn your laptop on, let it get to that temperature that lets you know your corduroy-encased thighs will soon burst into flames, and then fry an egg on top. You’ll even save water by eliminating the need to do dishes when you’re done.

See more in Computers or under Gadgets. November, 2009.