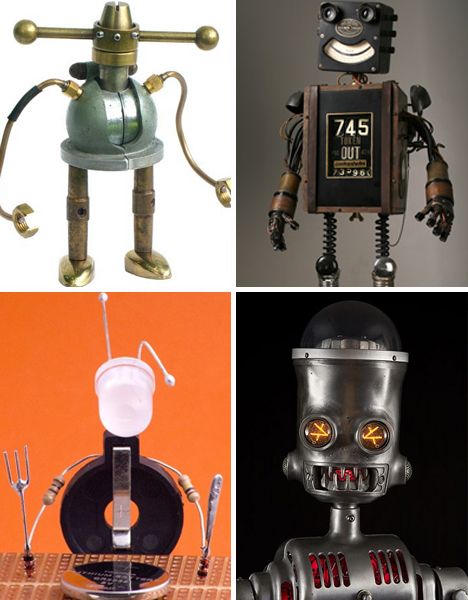 Is there anything more adorable than a friendly robot? They may not be cuddly, but you get the feeling that, with the right programming, they could be your best friend someday. What makes these robots even better is that they’re made from recycled parts. Their creators saved landfill space while repurposing someone’s “trash” into art that’s not only awesome to look at; it kind of tugs at your heart strings, too. 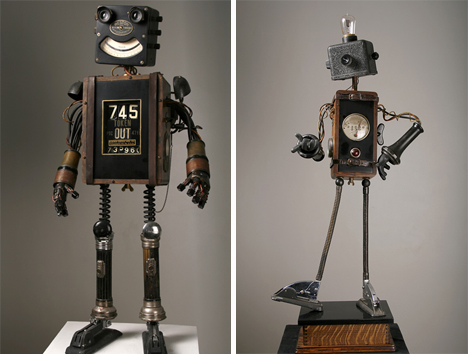 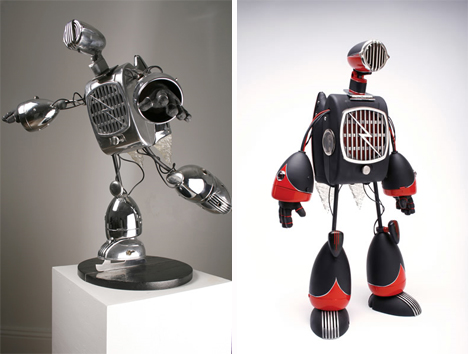 The robots of Mike Rivamonte are assembled from vintage and handmade items from the United States, Canada and Europe. Some are over a century old. The artist assembles the items carefully to create absolutely adorable robots with distinct personalities. After growing up next to the U.S. Space and Rocket Center in Huntsville, Alabama, Rivamonte naturally fell into bringing these sci-fi creatures to life. 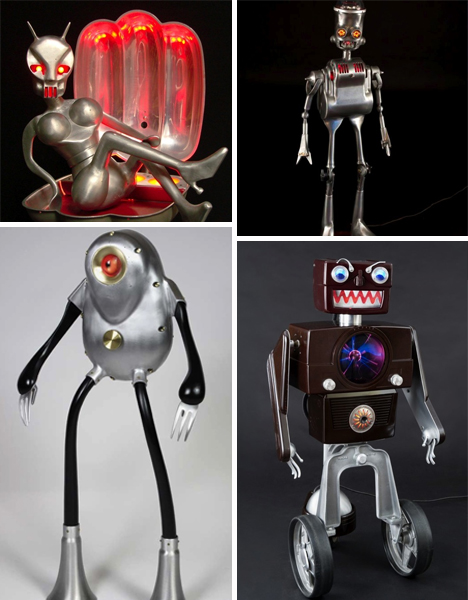 Artist Nemo Gould was born into a creative family, and he’s never been able to resist taking things apart. He’s made good use of that impulse by leveraging it to create his amazing robot sculptures, constructed entirely of found objects. His goal is to incite a child-like response in everyone who sees his work, because he says that adults are dangerously lacking in child-like wonder. His robots – some hilarious, some scary, all downright gorgeous – certainly do remove us from the dull daily grind of adulthood. Featuring moving parts and working lights, the sculptures are more than just art: they’re a vehicle back to simpler days full of wonder. 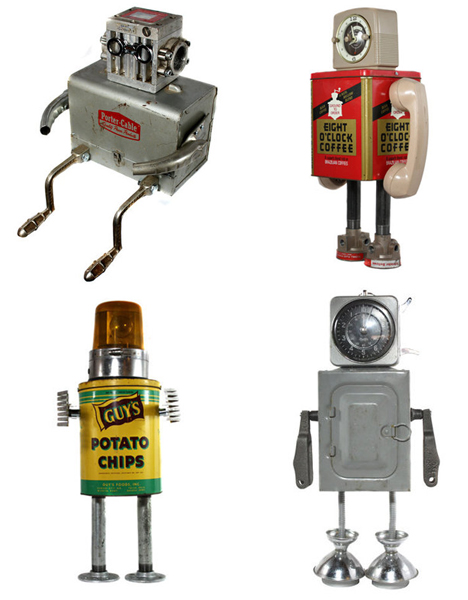 Kansas City husband and wife team Nicholas and Angela make up the fabulous Nerdbots, a projected devoted to adorable recycled robots. They roam antique shops, flea markets, and junk stores to find discarded mechanical bits. They then recycle the parts, big and small, into fabulous robotic sculptures – sadly, they don’t move, but they are fantastic nerdy bits of art. Each robot gets a name and backstory, and if he’s lucky he gets adopted and goes to live in a new and interesting home. 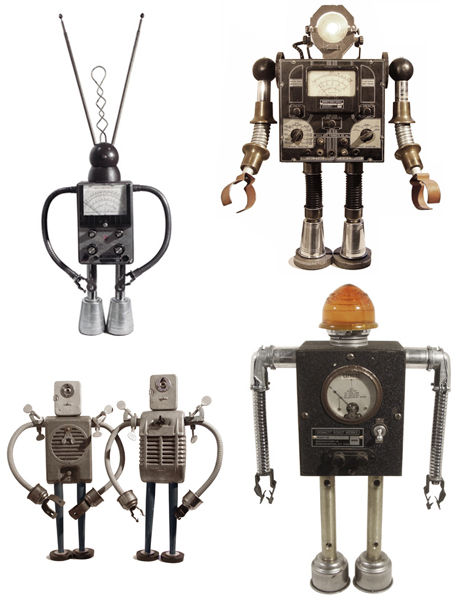 Gordon Bennett is the mastermind behind Bennett Robot Works. His robot sculptures are made from found objects, both old and new, which could be anything from old car parts to pieces of Bakelite to discarded pieces of wood. Each sculpture takes about a month to make, and the care the sculptor takes is evident in every one. 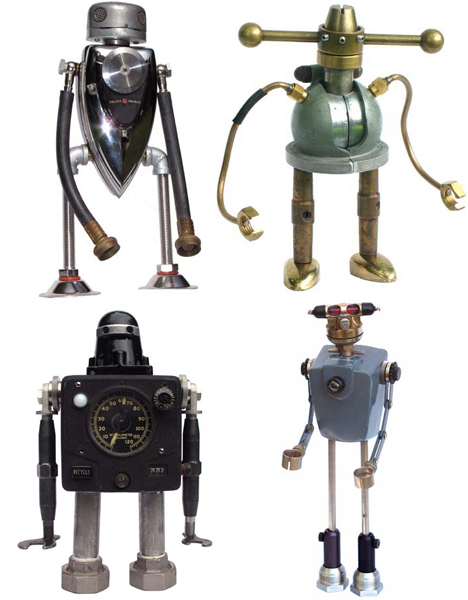 Guy Robots are assembled from all sorts of would-be refuse. Their bits and pieces come from car salvage yards, swap meets, aerospace and avionics surplus dealers, and even neighbors’ garbage cans. While they won’t move, talk, do your dishes or (according to their creator) harass your domesticated animals, they will certainly liven up any room. These fascinating little bots range from 6 to 20 inches tall, and they all have personalities as diverse as any human counterparts. 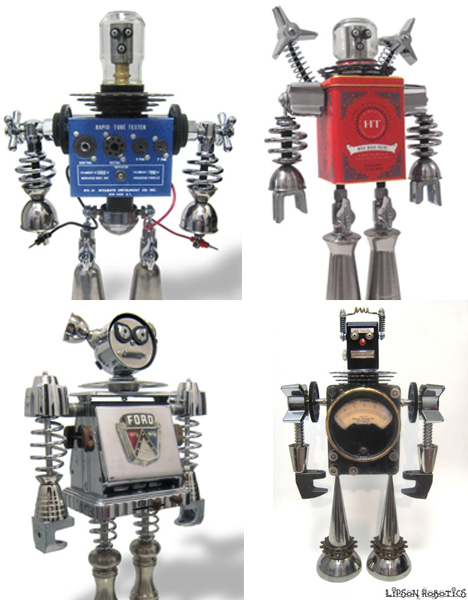 David Lipson has a successful career as an animation producer, but he still finds time to create some of the most imaginative and lovable recycled robot sculptures ever, under the name Lipson Robotics. Sure, some of their parts are new and not recycled, but many of them are assembled from discarded lamps, random pieces of metal, old radios and other flotsam and jetsam that find their way to Lipson’s capable hands. Lipson’s robots are generally 12 to 30 inches tall, and they have the kind of vintage charm that only robots can carry off so well. 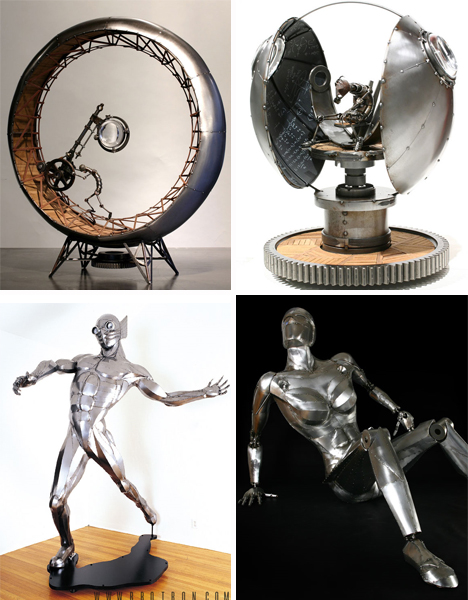 The fantastical Brotron sculptures from Greg Brotherton are less junkyard chic and more high art, but they are thrillingly complex. Some feature moving parts, some are based on ancient gods, and some are pure fun. Brotherton’s work – robots and otherwise – has been shown all over the U.S. We, of course, favor the robotic side of his body of work. According to his biography, Brotherton uses hammer-formed steel and repurposed objects to bring these amazing contraptions and sculptures to life. 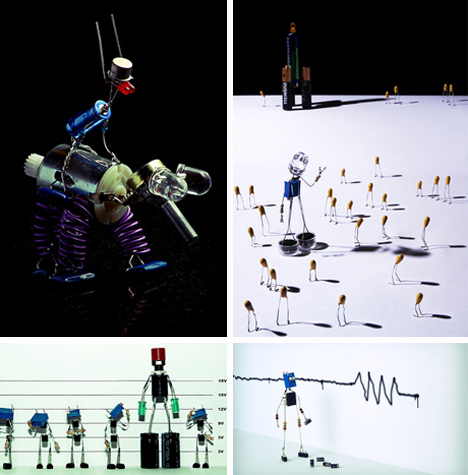 Sparebots, created by Lenny & Meriel, are tiny, sometime mischievous, often hapless little robots. They’re made of spare electronics bits, and despite their diminutive stature and sparse use of materials, they are chock full of personality and humor. It’s impossible not to love these tiny bots and the world they live in.