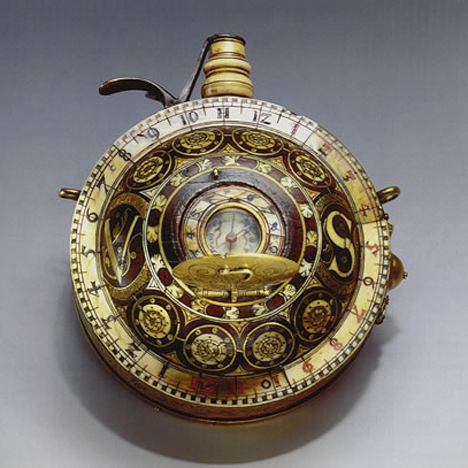 Most of us tell time these days by looking at a watch strapped to a wrist or by pulling a cell phone out of a pocket. But the timepieces from centuries ago were much more interesting. The one above is from 16th century Germany and now resides in the Beyer Watch and Clock Museum in Zurich. It’s a multifunctional piece that included a gunpowder flask, compass and sundial. The rosewood flask is decorated with ornaments of brass and bone, and at the top is the bone funnel used to insert the gunpowder. Beneath the small lid in the center of the piece is a sundial; a string gnomon is exposed by opening the lid and can tell the hours from 6 am to 6 pm. 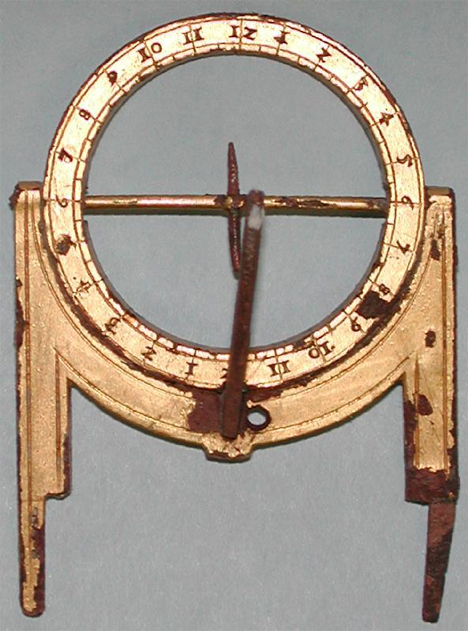 This gold-plated brass sundial was made in the same time period as the above multifunctional pocket sundial, but it’s missing the compass that used to be part of its design. It was excavated in 1997 at the former site of the Mission de Santa Cruz San Saba in Texas. The mission was destroyed by attacking Native Americans in 1758, but the sundial was made 177 years prior, making it a valuable heirloom even then. Why it was left behind and not taken as a prize is a mystery, but it’s lucky for us that the fascinating gadget was left behind for future generations to admire and study.