10,000+ Subscribers
Invisible Mouse: Controlling a Computer With Just a Hand 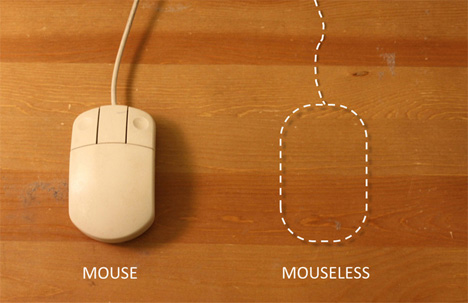 Has the computer mouse evolved itself right out of existence? Maybe so, if Pranav Mistry has anything to say about it. The designer, working in the Fluid Interfaces Group at MIT’s Media Lab, is developing the Mouseless: a computer input device that works like a traditional mouse, but without the presence of an actual physical mouse. 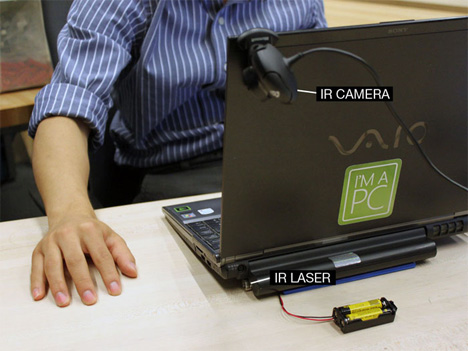 The Mouseless keeps the intuitive physical action of a two-button mouse that we’ve all become so accustomed to, but gets rid of the mouse. It uses an infrared laser beam and infrared camera, both of which are embedded in the computer, to track hand movement. The user positions his hand and taps his fingers in much the same way that he would if a physical mouse were present.

It might seem like nothing more than a fun gimmick, but the virtual mouse would have a number of advantages over a physical one. The system could be programmed to recognize gestures that a traditional mouse couldn’t handle, making actions like zooming much simpler. As the technology improves, more and more gestures could be included while the typical physical mouse can only handle a limited number of functions.

The prototype Mouseless was built for around $20, so there very well could be a future for this technology. And with a cost that low, manufacturers might one day be able to include one on each side of a laptop, allowing both lefties and righties to intuitively – and mouselessly – control their computers.

See more in Various Gizmos or under Gadgets. June, 2010.