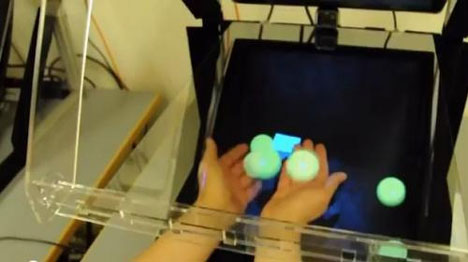 We won’t lie: we’ve been waiting a really, really long time for the future to get here so we can finally integrate holograms into everyday life. It hasn’t happened yet, but it’s about to thanks to Microsoft. Their Kinect has already been used to create some wickedly impressive projects, but this one might be the most exciting. The Holodesk lets users interact with virtual objects just like they were really there.

As seen in the video above, the system isn’t totally perfect yet – but what brand-new technology is? The secret is that the Holodesk doesn’t just track the user’s hands; it tracks his eyes as well. Following the user’s gaze helps to make the hand-tracking technology even more accurate, allowing the Holodesk to project surprisingly realistic objects into the viewing area and letting the user interact with them in exactly the same manner as real, physically-present objects. Microsoft doesn’t seem to have any plans to market the Holodesk currently, but it’s easy to see how this technology could contribute to future gaming applications.