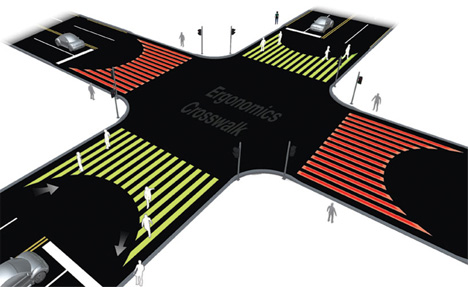 Jaywalking has been decried by lawmakers and cursed by motorists for as long as cars have darted along streets. Yet most of us still do it on a regular basis. Why? Because crossing the street where we want to, when we want to is easier than waiting until we get all the way to the crosswalk and the little green man lights up. In the interest of keeping pedestrians safe but still giving in a little to all of our impatience, Korean designer Jae Min Lim designed the Ergo (as in ergonomic) Crosswalk. 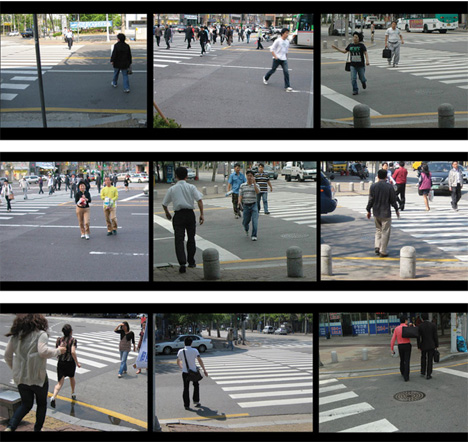 The new crosswalk design doesn’t exactly make it simple for anyone to just dart across the street, but it does make it easier for pedestrians to start crossing the street as they approach the crosswalk. By giving the ends of the crosswalk a little curve near the pavements, the design cuts out that very dangerous (and currently illegal) few seconds when a pedestrian is stepping out into unprotected vehicle territory. As seen in the images above, most walkers don’t stick to the crosswalk territory when crossing the street. The Ergo Crosswalk would extend that territory just a bit to match up with the way people actually walk. 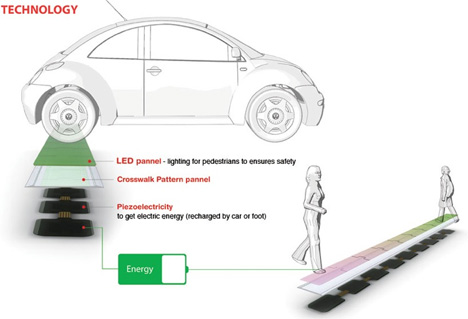 If this design were implemented, it might cause drivers to stop a bit further back from the crosswalk than they are used to. This would, in all likelihood, enrage a lot of people in cars. But it would also likely reduce the number of vehicle-on-pedestrian collisions at crosswalks, which is always a good thing. Lim imagines that the crosswalk could be illuminated with green and red lights that would tell pedestrians when to walk and would run on piezoelectric panels under the street. We would like to point out how dangerous putting red and green lights on the street’s surface would be, particularly when they would be so very likely to cause the very vehicle-on-pedestrian incidents the designer is trying to avoid. But aside from that small detail, the idea seems like a simple to intelligent tweak to an existing design.

See more in Industrial Design or under Technology. September, 2010.