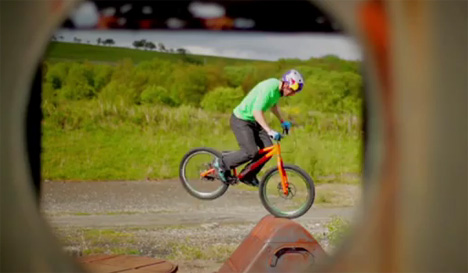 In the beautiful hills of Scotland, there’s an industrial train yard that recently got totally owned by world-class bike star Danny Macaskill. Taking his bike into an abandoned train yard for a Channel 4 documentary, Macaskill performed some of the most amazing feats we’ve ever seen anyone even attempt on a bike. It should go without saying, but just in case: don’t try any of the tricks in the video below. Ever. This Danny cat is a pro.

Macaskill is so proficient on his bike that he almost seems to perform more fluidly on it than off of it. He does some crazy jumps, daring flips, insane hops – and by the end of the five-minute video your mouth will definitely be hanging open in amazement. The short video is called Industrial Revolutions and it was filmed as part of Channel 4’s Concrete Circus documentary.

See more in Bikes & Cycles or under Transportation. November, 2011.