10,000+ Subscribers
Incredible Glowing Marine Snail and the Secrets of its Shell

Anyone who has ever been sprayed by a skunk can attest to the awesome power of animal defense mechanisms. A team of researchers from Scripps Institution of Oceanography has uncovered a much less smelly but even more impressive example of extreme defense mechanism in the clusterwink snail. The small marine snail gathers in clusters on rocky shorelines. While it’s been known for quite a while that the snail is bio-luminescent, the researchers discovered that the way the snail uses its natural light is quite impressive. 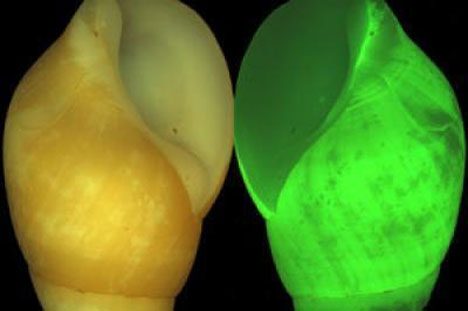 Rather than emitting a focused beam of light, the clusterwink snail’s shell diffuses its light and spreads it in all directions. This unique mechanism has the effect of making a single tiny snail look like a much larger animal to predators. But even more amazing than the snail’s lighting scheme is the very precise way it is produced: the clusterwink’s shell is yellow and opaque, and would seem to be a very poor material for transmitting light. But the researchers found that the shell has specifically evolved to transmit only the particular color of light produced by the snail. The strange little marine snail and its amazing light-transmitting shell could lead to essential advances in optics research.