10,000+ Subscribers
I Can See My House From Here! Smallest 3D World Map Ever 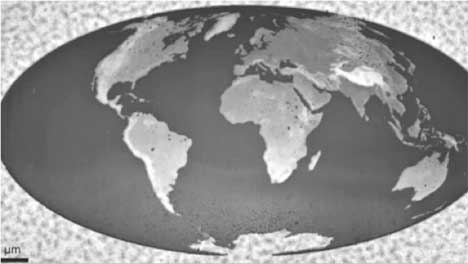 IBM is showing off their new nanopatterning technique with the smallest 3D map of the world that has ever been created. The itty-bitty Earth is so tiny that 1000 of them could fit on a single grain of salt. The map measures just 22 by 11 micrometers; the underlying material used to create the map was an IBM-created polymer called polyphthalaldehyde. An extremely tiny silicon tip was used to etch the polymer with a point that’s roughly 100,000 sharper than the point of a pencil. The machine that IBM used to create this miracle of nanotechnology completed the feat in under 2.5 minutes.

While a sub-microscopic world map might not seem like a great breakthrough for science, the above video points out that this technique could actually have a huge impact on all areas of nanotechnology. According to IBM, applications could include rapid nanoelectrics prototyping and shape-matching components of self-assembling nano objects. Besides being able to produce better resolutions than other methods, the machine IBM used to create this new world is small enough to fit on a tabletop and costs about one-fifth to one-tenth of current techniques.

See more in Futuristic or under Technology. April, 2010.