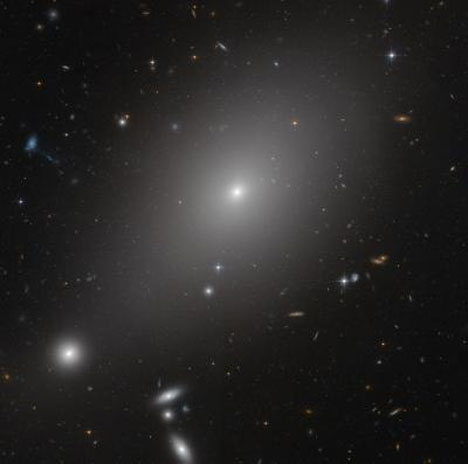 Space isn’t a peaceful place, by any means, but some places are more violent than others. Fossil groups, for example, are remnants of what were once probably thriving communities of galaxies – and the remains we see today are the once-hungry galaxies that devoured all of their neighbors. ESO 360-17 is one such galaxy; these images from the Advanced Camera for Surveys aboard the Hubble Telescope show the lonely existence it’s created for itself. (The galaxies that appear at the bottom left of the image may appear to be close to ESO 360-17, but they’re actually closer to the camera, not in the area of the galaxy in question.)

The “bully” galaxy, located half a billion light years from Earth, is thought to have been surrounded by neighboring galaxies at one time. But gravity brought those other galaxies to their doom as they were eaten up by ESO 360-17. Eventually, the only objects left nearby were globular clusters: dense groups of stars that can resist the pull of cannibal galaxies. So the next time you’re tempted to make fun of that loner you know, remember that they might be that way for a good reason.