What gender is the face on the left? How about the one on the right? Most people would say that the picture on the left shows a woman and the picture on the right shows a man. Actually, both pictures show the same androgynous face, but with differing levels of contrast. Richard Russell, assistant professor of psychology at Gettysburg College, published a study in the scholarly journal Perception about the effects of contrast of human faces on the perception of gender. He found that faces with more contrast are seen as more feminine, while faces with less contrast are seen as more masculine. 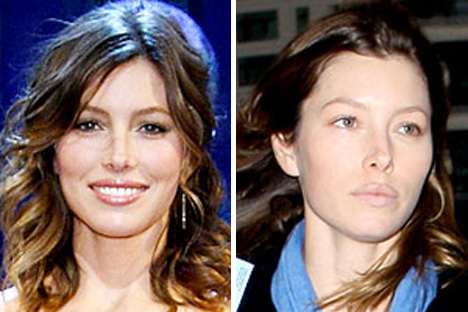 Typically, female faces feature lighter skin than male faces, regardless of gender. However, Russell found that female lips and eyes are not correspondingly lighter, giving female faces a much higher contrast than those of males. His findings serve to illustrate why cosmetics work to make women’s faces appear more feminine: darker eyes and lips give us subconscious cues as to the face’s gender. The above photographs of actress Jessica Biel with and without makeup demonstrate this perfectly; while she certainly doesn’t appear masculine in the photograph without makeup, the lower contrast of her eyes and lips in that picture does make her look less overtly feminine. Since we are genetically programmed to think of highly feminine faces as more attractive than less feminine ones, higher femininity increases our perception of attractiveness, at least subconsciously.