10,000+ Subscribers
High-Tech System For the Blind Substitutes Music for Sight 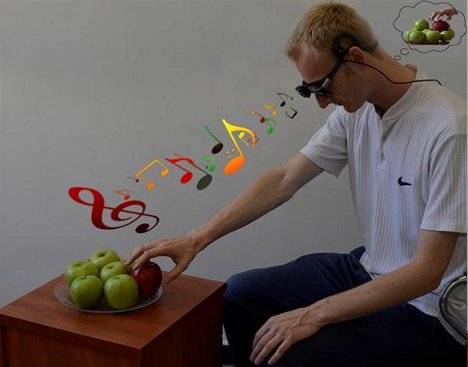 When a person does not have use of one sense, it is often possible to use a different sense in its place. That is exactly how a system called EyeMusic works: when worn by a blind person, it substitutes audio “soundscapes” for sights. The system was created by a group of researchers at the Hebrew University of Jerusalem with the hope that it could eventually help visually impaired people navigate situations like grocery shopping more effectively. The system includes a camera attached to a pair of sunglasses and a pair of headphones that transmit sounds through the user’s skull rather than through the ears.

When looking at an object or a scene, a short, unique piece of music plays. Colors are represented by instruments (violin = yellow and trumpet = blue, for example) and an object’s position on the X and Y axes is represented by the pitch of the sounds. The system sounds a bit complicated, but in tests blindfolded subjects were able to catch on to its functionality very quickly. It will be a while before the system makes it into households, but the novel idea is a great start on the path to assistive devices for the blind.

See more in Cybernetics or under Technology. July, 2012.